If you’ve ever had to ask someone out you’re attracted to, performed the Macarena, or baked chocolate chip cookies you know that timing is everything. That also extends to your car as well—particularly your engine. Just like how you need to stay with the rhythm of a dance a car’s engine needs to stay in time with the pistons. This is where one essential car part comes into play: the timing belt. But what is a timing belt and why is it so important to replace them when they’re worn down?

Below, we break down one of a car’s most essential parts and how to maintain it.

What Is a Timing Belt and Why Is It so Important to Replace Them?

Like a bike chain, a timing belt keeps all the internal moving parts of an engine in sync. This belt is made from rubber with hard teeth that interlock with the cogwheels of the crankshaft and the camshafts of a car’s engine. It synchronizes the movement of the crankshaft and camshafts. This directly helps with the power of your engine and synchronizes the pistons so that the engine intake and engine exhaust are timed properly.

In older cars (ones made before the 1960s), timing chains were used instead of timing belts. These timing chains functioned the exact same purpose as a timing belt but were made of metal instead of rubber. They tended to last longer but made the engine louder as well. 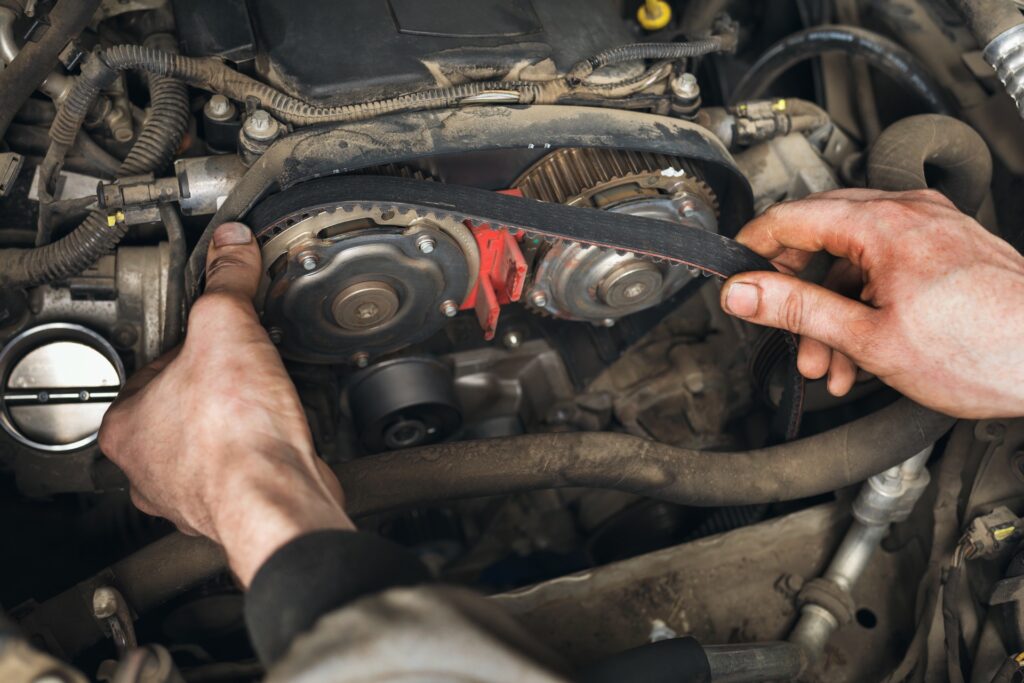 When Should You Replace Your Timing Belt?

Like many parts on cars, regular maintenance and replacement of your timing belt are important. Your car’s owner manual will detail the exact time but typically it will range between driving every 95,000-160,000km.

It’s important to note that without the timing belt your car is essentially dead as the engine won’t run. As such, making sure you replace it at the right time is crucial so it doesn’t break which can be easily done by a Kelowna mechanic. Mechanics have special tools that can loosen your old timing belt and add your new one on properly that can’t easily be done yourself.

Some of the main indicators it’s time to replace your timing belt include decreased engine power, engine overheating, the car is vibrating or shaking, or the car is having a hard time starting. There could also be signs like squealing or rubbing noises from the belts or a ticking sound coming from the engine. Finally, leaking oil and if the check engine light is on could also both be signs you need to replace your timing belt.

Overall, the timing belt is essential to any car and regular replacement of it can help your vehicle last significantly longer.

Looking for tires on a budget? We offer top-quality used tires at affordable prices. Contact us today to see what tires we have in stock for your vehicle!